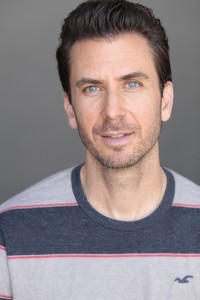 On Screen, I can currently be seen in the biopic ‘LBJ’ (Lyndon Baines Johnson) in which I not only got to work with (and learn from) director Rob Reiner and actors Woody Harrelson & Jennifer Jason Leigh, but also filmed in my hometown of New Orleans. – Since moving to Los Angeles, my Commercials include ads with Dr. Pepper, Kenwood, and Nike. – Television includes parts on ABC’s ‘General Hospital’ & ‘Grey’s Anatomy’ and Showtime’s ‘The L-Word’. – Film includes various independent features, some self-produced (with help) and others, like ’21’ , which won Best Picture at the Rhode Island International Film Festival.

On Stage, I just finished a sold-out run playing the role of ‘Business Man’ in Michael Leoni’s hit PLAY ‘Elevator’ at The Coast Playhouse. I’ve also starred in many other notable SoCal productions including Chet Holmes’  ‘Emily’s Song’ at the Hudson Theatre, Theresa Rebeck’s ‘The Family of Mann’ at The Attic Theatre, Israel Horovitz’s ‘A Rosen By Any Other Name’ at The Fountain Theatre, and Harold Pinter’s ‘A Night Out’ at The Edgemar Center for the Arts.

No Artist can grow a career without good teachers.  And I’ve been lucky enough to conduct most of my training under the esteemed tutelage of Ivana Chubbuck, Ben Davis, Lesly Kahn, Michelle Danner, and Shawn Nelson. It is in no small part due to their knowledge, as well as the wisdom gained from such personal influences as Jane Jenkins, Beth Klein, Ted Schachter, Willie Mercer, Michael Nozik, Pamela Bellwood, Sela Ward, Dick Clement & Ian La Frenais, Ned Haspel, Danny Gabai, and the late great Mr. Greg Coote (just to name a few) who encourage me throughout the years as I generate my own projects; including past screenplays covered by HBO & F/X, as well as CAA & WME.

One thought on “Bio”

“It’s strange that the only sympathy I get these days is from a would-be assassin or a woman I tend to annoy. Would you care to dance?” – 1993

Like many of you, CINEMA is, and always shall be, my PASSION.

Scattered throughout my website is a myriad of film-quotes (some famous, some obscure) . Try naming the corresponding film AND actor(s) to each line.